Deceased in Koihime†Musō, it's mentioned that she was the ambitious leader of Go faction who dreamed of uniting China under her rule. However she was assassinated before her dream could become a reality. She had a very close relationship with the Go strategist Shūyu and only makes an appearance during Shūyu's flashback.

In the Go route she is introduced as an ancillary general under Enjutsu. It is revealed that after the death of her mother, Sonken Bundai, most of her conquered territory is lost, forcing her to rely on Enjutsu to recover and wait for the right moment to break away.
While on patrol one night with Kōgai, they encounter a white burst of light. After the light fades they discover Kazuto sleeping on the ground. Aware of the Messenger of Heaven legend, she suspects him to be the messenger and brings him back with the intent to introduce his blood into the Son bloodline. After talking with Kazuto, she also trains him to become her strategist.
Her rise of power began during the Yellow Turban Rebellion. Fooling Enjutsu, she uses the war effort to secretly gather soldiers and resources, as well as rejoining with her sister Sonken. During the anti-Tōtaku war she forms an alliance with Ryūbi in order to combat Sōsō in the future.
Soon after she breaks away from Enjutsu and set up her own kingdom of Go. Her tenure as leader is tragically cut short when she is assassinated prior to a battle against forces of Gi, subsequently passing the mantle to Sonken, and causing the Go faction to misunderstand that Sōsō is the one whoSōten no Haō plotted her assassination.

In the Gi route she is first introduced confronting Kakōton after the latter trespassed into Enjutsu's territory while pursuing the Yellow Turbans. It is revealed that she is working under Enjutsu as an ancillary general. While she helps Kakōton chase down the Yellow Turbans, Kakōton feels uneasy about her, sensing her strong ambitions and likening her to a tiger in a cage. She meets Sōsō for the first time in the anti-Tōtaku conference, during which Sōsō promises to repay her aid in hunting down the Yellow Turbans. She rebels and breaks away from Enjutsu during the En invasion of Gi and spends most of the time afterwards warding off attacks from the En branch families.

She survives in the Shoku route and appears in Moe Shōden, which follows the Shoku ending.

In Moe Shōden she abdicates the throne to Sonken and becomes largely a comic-relief character. Carefree and often getting drunk, she frequently comes up with silly plans and behaves idiotically while intoxicated. Her survival and Kazuto's central role in uniting all three factions saves Shūyu from dying of illness.

Sheren is the first to find Kazuto after he arrives in her world, and instantly takes a liking to him and is happy and eager with the idea of Kazuto being the breeder for the Go family. She continues to make friendly and seductive advances to Kazuto, especially after she becomes queen of the Go Faction. She is treated more harshly than her sisters by her mother, Sonken Bundai, due to her being the next in line to the Go Family. Even though Bundai loves her daughter dearly, she worries that Sheren does not have the will to be Queen as she skips her training lessons and enjoys drinking around the city too frequently.

While she displays a carefree attitude, Sheren is a realist when it comes to war and the nature of the warring states and the advantages Kazuto brings to them. She then tries to backtrack the harshness of her words when she realizes how cold they sounded, which Shūyu deduces is because Sheren likes Kazuto and didn't want Kazuto to dislike her. Sheren then continues to be trained by her mother, while also continuing to charm up to Kazuto.

When Bundai is "killed" Sheren is able to spend Bundai's last moments together with Kazuto and promises to fulfill her role as Queen to the utmost. After becoming queen, Sheren starts taking her role in the Go family more seriously, while still finding time to revert to her relaxed demeanor. Eventually, her passionate feelings for Kazuto overwhelms her and they begin a passionate relationship.

In keeping with Shin Koihime†Musō, Sheren is attacked by a poisoned arrow while she is visiting her mothers grave. Despite knowing the dangers, instead of resting, she leads her army against the Gi army. Doing so causes her to succumb to the poison and thanks Kazuto for being with her as she "dies" in Shuyu's arms.

Sheren survives the assassination attempt on her life as she was traveling with Kazuto to her mothers grave. While Sheren is unharmed and killed the would be assassins but Kazuto is hit with an arrow. However, the arrow Kazuto is hit with was not among the poisoned ones and he is relatively unharmed.

Sheren then leads her army against the Sōsō faction, during which Kazuto is kidnapped and made prisoner by the Gi. However, Sheren believes that Kazuto will be alright as he is the 'Messenger of the heavens', causing others in her army to wonder why she is so calm. Eventually, it is revealed that Kazuto's kidnapping was part of Shūyu's predictions, with Shūyu instructing Kazuto that if he gets caught, for him to gain the Gi factions trust and leak false info to the Gi army, giving the Go army a overwhelming advantage. Sheren then proceeds to defeat the Gi with the aid of Ryūbi's army.

Years after the battle, Sheren and Shūyu are shown to have had Kazuto's children, each a girl, which they bring with them to Sonken Bundai's grave. As they are greeted by other generals and members of the Go faction, Sheren brings up that Kazuto has more 'work' to do with them to spread the seeds of Heaven. She and Shūyu then stand in front of Bundai's grave and proceed to show off their daughters, hoping Bundai is pleased with them and will continue to watch over them all.

Way of the Five Grains Edit

After the assassination attempt on her life, Sheren is bedridden on her way to battle the Gi faction. She is found by Kazuto, Kada Genka, Chōsen and Himiko who are continuing their adventure. Upon finding Sheren, Kazuto feels a sense of recognition and familiarity, but confesses to Kada that he does not know her. Kada then recognizes Sheren's injury and deduces that she is poisoned. He then proceeds to heal her, saving Sheren from her 'death'.

As she travels with Kazuto, she quickly warms up to him and tries to charm him, making offers to spend the night with him and making advances on him, causing Chōsen to go on jealous rampages. During their travels, they come upon an enraged dragon that is in battle with, much to Sheren's shock, Sonken Bundai, who was thought to be dead. As they assist Bundai in attacking the dragon, Kazuto gives Sheren a special sword that she and Bundai use to slay the dragon together. After the dragons defeat, Sheren and Bundai talk over their responsibilities to the Go family, but decide it's best to leave the title of Queen to Renfa, as both Sheren and Bundai have been, in their own views, defeated. Bundai is introduced to Kazuto and again, both sense that they know each other while admitting they have never met with Bundai soon taking a liking to Kazuto.

Reunited with her mother, Sheren decides to travel with her Bundai and part ways with Kazuto's group. She thanks Kazuto for all the fun and makes him promise to meet again. She then passionately Kisses Kazuto and promises to meet him again while Chōsen goes on another jealous rampage.

As Kazuto runs from Chōsen, albeit to their next adventure with Kada and Himiko, Bundai questions Sheren to why she didn't go with Kazuto. Sheren replies that She feels that she does truly know Kazuto and while she can't remember them meeting, she feels that in some way they actually have and that her heart is telling her she will meet Kazuto again.

The queen of Go Kingdom and the eldest sister of the Son family. While loving and caring to her sisters and subordinates, she is ruthless in battle to her enemies.
To fulfill the last wishes of her late mother, she has led her kingdom into a long war to unite China. While her methods have been scrutinized, she admittedly accepts responsibility for her actions since she would rather have her hands bloody rather than have her family suffer the same fate as she has. She hopes to abdicate in favor of her sister Sonken and retire with her lover Shūyu after fulling her mother's wishes.

Queen of Go faction and the eldest sister of the Son family. She holds the reputation "Little Conqueror" due to her ambitious dream of unifying the land. However, contrary to her position as a leader, she is very willful and childish in many ways. She has a habit of doing things on a whim, acting in a playful manner and giving off the impression of treating everything lightly. As a result, Shūyu often scolds her to remind her of her duties. Nevertheless, she is well aware of her responsibilities and will become serious when necessary.
Her personality changes dramatically during battle. Rather than her normal playful demeanor she becomes a ruthless warrior with a strong blood lust. Due to this, she often goes on a rampage and personally lead head-on charges at the enemy, ignoring any strategy made before the battle.

Sheren and Shuya have been friends since childhood and have been intimate with each other in their time together. Their relationship has been shown to be professional, friendly, trusting and sexual.

In Shin Koihime†Musō Go route, Sheren begins to fuel a passion for Kazuto, and later love. They managed to spend the night together before the next day she was "killed".

In Moe Shōden and Shin Koihime † Eiyuutan she continues her love for Kazuto continues and with her sisters and friends, continues to seduce and be with Kazuto, telling him to do his utmost for the Go family.

In Shin Koihime†Musō -Kakumei-, Sheren is much more attracted and friendly to Kazuto and enjoys the thought of spending time with Kazuto as a breeding horse. Just like in Shin Koihime†Musō her passion for Kazuto eventually overwhelms her and she falls in love with him. In the special ending, she and Kazuto have a daughter together.

Shin Koihime†Musō -Kakumei- has a continuation route that follows Kazuto's journey with Kada. In this route, Sheren is saved from her 'death' and instantly feels a connection to Kazuto despite them not having met before. As she travels with Kazuto, Her affection continues to build and she makes several sexual advances to Kazuto. When she and Sonken Bundai are reunited and decide to journey together, she parts from Kazuto's group by promising that they will meet again and gives Kazuto a passionate kiss. Sheren then tells her mother that she knows that she and Kazuto will meet again.

In 2010 MileStone(now closed) released Twinkle Queen (トウィンクル クイーン), which is a fighting game for the Wii crossing over girls of 4 different eroges: Shukufuku no Campanella; Tayutama: Kiss on my Deity; Shin Koihime Musō; and G Senjō no Maō. Three girls from each eroge are featured for a total of twelve fighters. Ryūbi, Sōsō, and Sonsaku are chosen to represent K†M. 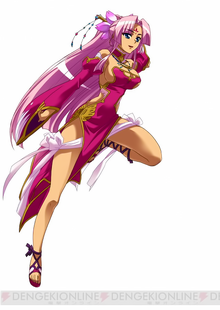 Sonsaku in Twinkle Queen
Add a photo to this gallery

Retrieved from "https://koihimemusou.fandom.com/wiki/Sonsaku_Hakufu?oldid=20477"
Community content is available under CC-BY-SA unless otherwise noted.