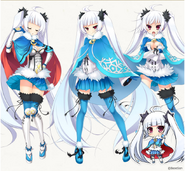 Miku's technique, with the help of which she invokes the spirit-keeper of Nagao Clan

Miku enters the battle with the leader of Takeda Clan, Hikari

Miku and Hikari conclude a truce between them and their clans

Miku is going to kiss Kensuke for the first time

Meeting of the three leaders of the clans Oda, Nagao and Takeda

Miku with Hikari, along with the rest of the girls, hastens to help Kensuke in his final battle

Miku, along with Hikari, Kuon, Kazuha and other girls, is going to become Kensuke's wife at their wedding
Add a photo to this gallery
Retrieved from "https://koihimemusou.fandom.com/wiki/Nagao_Miku_Kagetora/Gallery?oldid=19437"
Community content is available under CC-BY-SA unless otherwise noted.