The younger sister of the Kakōton and also Sōsō's cousin and a general of Gi. She is first introduced taking part in the anti-Tōtaku campaign. During the war against Hongō faction she and her sister surrender and plead to Kazuto for aid after realizing Sōsō is being controlled. After Sōsō's rescue she becomes a captive of Hongō faction. She shows no signs of resentment towards Kazuto after being captured and even go as far as placing him as her 5th favorite later on (first three are Sōsō, her sister, and Kyocho. It's hinted that the fourth is Ganryō, which she neither confirms nor denies). Other than Sōsō, she's the only one capable of calming her sister.

She accepts Kazuto fairly early on in the story, and quickly becomes friends with him. She often gives him advice to help him adjust to his new life and even helps him out when he's caught in a difficult situation.

Kakōen wants to continue to aid her sister and Kazuto in training and fighting with Sōsō's armies. It is noted by many, including Kazuto, that something about her is different, yet she continues to claim that she is alright, despite secretly being revealed to having morning sickness at times.

Kakōen then starts to show an interest in children and becomes concerned at her sisters inability to deal with them, while also showing interest in Kazutos opinion in having children. Kakōen then strengthens her relationship with Kazuto, which eventually is noticed by Kakōton, causing her to frequently ponders over it.

During an ambush in a training exercise, Kakōen is hit by a poisoned arrow. In her sisters arms, she then tells Kakōton the truth; that she is pregnant with Kazuto's child, causing Kakōen to go on a silent rampage against the enemy forces. As she gets weaker in Kazutos arms, she attempts to tell him about her pregnancy but falls unconsciousness.

Kakōen survives the poison, with her pregnancy then being revealed to everyone, and is then constantly told by everyone, especially Kazuto, to take better care of her self and her child. Kakōen is then happy that she and Kazuto are having a child and that Kakōton is also happy about it.

Kakōen is removed from her original military position by Sōsō, who already knew about her pregnancy yet previously allowed her to remain out of Kakōens own wishes, leaving Kazuto and a more energetic Kakōton to do her part in the army.

The younger twin sister of Kakōton. Just like her sister, she is extremely loyal to her cousin Sōsō and is one of the generals. But in contrast, she is much calmer and is quicker in thinking.

Despite being the younger one, she serves as a foil to her hot-headed sister. Always calm and collected, Kakōen rarely loses her cool, which plays a big part when keeping Kakōton in check. On the battlefield her sound judgement is often the only thing that prevents Kakōton from charging the enemy at first sight. Although she is no match for an actual strategist, she is still very intelligent and could fill in as a strategist in a pinch. Like Sōsō, she was also able to (partially) understand Kazuto's situation. In everyday life she is very nice and easy to get along with, but occasionally she likes to tease Kakōton and Kazuto in her own subtle way (or teaming up with Kazuto to tease her sister). Furthermore, she does enjoy being pampered, and should the opportunity arise, will act accordingly to get the attention she wants. Due to her levelheaded nature, she does not stand out much compared to many of the other girls.

In the anime her personality is greatly reduced (largely due to the improvement of Kakōton as a character), making her a lackluster minor character. Her calmness remains, but her intelligence and the rest of her charm are largely shadowed.

Like her sister, Kakōen is in a lesbian relationship with Sōsō. However, she doesn't share the same extreme devotion and does not harbor any negative feelings towards men. As a result, she easily develops a normal romantic relationship with Kazuto. She also doesn't mind sharing him with her sister and Sōsō. In the first VN it is implied that she has some form of an incestuous relation with Kakōton, although to what extent is unknown. In the second VN she is blatantly a siscon, she finds Kakōton's slow-wittedness cute and will even resort to stalking just to observe the latter's "cute" behavior. 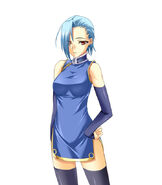 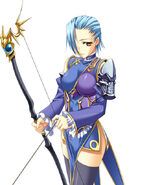 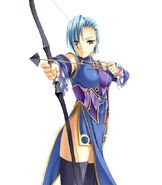 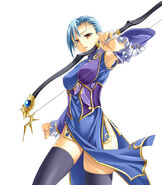 Kakōen as part of the Gi suite

Kakōen is preparing to attack

The Gi generals in action 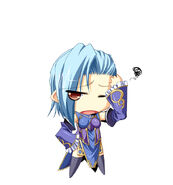 Kakōen and Ten'i, along with the other Gi generals, go on the attack

Shūran angry with her sister Shunran, and she in turn tries to apologize 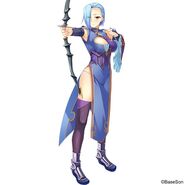 Repeat the scene from the original. Shūran together with Karin, Shunran and Keifa lead the Gi army

Repeat the scene from the original. Shūran provides services Shunran and Karin

Repeat the scene from the original. Shūran, accompanied by her older sister Shunran and Kii

Repeat the scene from the original. Shūran and Kazuto witness the accident of Shunran

Shūran and Ruru, along with the other Gi generals, go on the attack

Repeat the scene from the original. Shūran releases a deadly arrow

Repeat the scene from the original. Shūran sits at the table with Kii and her older sister Shunran

Repeat the scene from the original. Shūran kissing Kazuto
Add a photo to this gallery 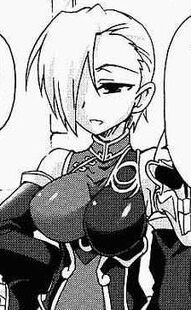 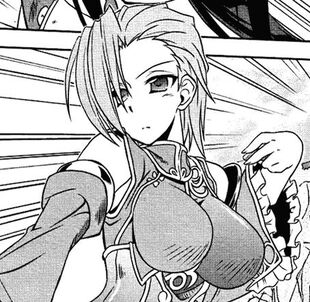 Retrieved from "https://koihimemusou.fandom.com/wiki/Kak%C5%8Den_My%C5%8Dsai?oldid=18157"
Community content is available under CC-BY-SA unless otherwise noted.