Goko is a group of villains in Shin Koihime†Musō - Shoku route and Shin Koihime † Musō - Kakumei ~Ryūki Hata no Taibō~.

This group is the strongest and most dangerous bandits in all of China. They tried to take control of the Three Kingdoms, but they were defeated when the kingdoms of Shoku, Gi and Go worked together to repel them.

During the Battle of Red Cliffs, Hongou Kazuto brought the leaders of all three kingdoms together to warn them about a powerful enemy which will invade China in the future. He further states that continuing the battle would surely result in Gi's defeat, while Shoku and Go would not be enough to drive off this new threat. This revelation causes Kazuto to be rejected completely back to his own timeline. The manga ends showing the three kingdoms, now allied together, ready to face a large army in the distance.

(Note the name "Goko" is never explicitly stated in the manga.)

The main antagonists, led by Ryū Hō, who seeks revenge for the deaths of her husband and daughter.

As an army they're strong enough to pose a threat to all three factions. Although the details are never depicted, in Ryuusei ga Tsumugu Monogatari a Goko mob led by Ryū Hō somehow managed to heavily injure Chō'un and Ryofu and force them to retreat. 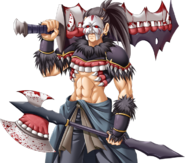 Goko soldier
Add a photo to this gallery

Kazuto mentioning a powerful enemy in the near future.

Sōsō commenting on the opposing army.
Add a photo to this gallery

Retrieved from "https://koihimemusou.fandom.com/wiki/Goko?oldid=18281"
Community content is available under CC-BY-SA unless otherwise noted.